skip to main | skip to sidebar
Welcome to the samurai action blog. The samurai films in Japan are like the Western film of the United States. Both were once very popular, but not as much now. Both themes pop up every so often bringing up the hopes for some sort of revival, but that has not yet happened. In 2010, I published a book, titled, Sword of the Undead, which re-told Bram Stoker's novel, Dracula, with a samurai twist. (Click here for excerpt)

As some of you know, for the past 16 months, I have been recovering from spinal cord injury, which left me temporarily paralyzed, and made for my goal, to be able to run a 5K run. I'm at the point where I can walk a 5K - but the motion of running is something I can't do, yet.

Today, on AOL's everday health page, I read a story of Lyle Anderson, who was diagnosed with MS almost seven years ago.  This year, he will be competing in the Ironman Championship in Kona, Hawaii.  Click here for his inspiring story.
Posted by Unknown at 9:13 AM No comments:

Official Executioner for the Shogunate?

I've always read that the position of official executioner for the Bakufu was a fictional position, thought up by Kazuo Koike, for the manga, Lone Wolf and Cub.

However, I am reading a book titled, Behind the Face of Japan, which is another post in itself as it was originally written in 1934, and revised in 1942, that mentions the last of the official executioners, but not by name, so I couldn't research it through that means.

However, coming across this tidbit of information has generated curiosity in my part to further research this subject more.

Labels: Behind the Face of Japan, executioner, Lone Wolf and Cub

I just finished writing a short story about zombies attacking a commuter light rail train in Los Angeles, and the ninja, Kaze no Katsumi (which turns out to be my alter-ego, in the story) has to save the commuters.

It is available on Amazon Kindle. Please check out Zombie Brawl, or Rants and Raves of a MAss Transit Commuter the Day the Zombies Attacked the Train
Posted by Unknown at 8:56 AM No comments:

This is more of a teen-age girl fantasy/romance, but it does take place during the Sengoku era.

It's one of the most popular animes from Japan.  It lasted for almost 200 episodes, and the manga, I think, went on for about 12 years.

Although the series had been going on for years, and ended a couple of years ago, I recently found a dvd of the first 54 episodes and I got hooked.

Basically, the plot is about a 15 year old girl who time travels back to the Sengoku era.  Apparently, she is the reincarnation of a priestess, who fights demon, but was killed. She resurrects a half-demon young man who wants to be a full-fledged demon.  But in the ensuing battle, she shatters a gem that has magical powers.  The entire series is about collecting all the fragments of the gem - for use - good or evil, depending on who gets hold of the whole gem.

As I write this, I realize it is pretty in-depth. Here is the wiki to the story: Inuyasha
Posted by Unknown at 10:45 AM No comments:

I just saw the trailer for 47 Ronin and this is worse than Frank Miller's 300. At least that movie had a connection to the Battle of Thermopylae (as fictionalized as that was). This movie has nothing to do with the revenge killing of Lord Kira for the forced seppuku of Lord Asano.

I'm sure it will be an enjoyable film, as I enjoy the movies of both stars, Keanu Reeves and Hiroyuki Sanada.  But really, did they have to title the movie, 47 Ronin?

Normally, in a post like this, I would link to the preview, but I'm not going to do it for this one - Unless they change the title.

Posted by Unknown at 9:56 AM No comments:

I actually remember the call for extras when this movie was being made.  Then I remembered the critisism by some Japanese Americans who felt that an Asian actor should play opposite Cruise since it was an American picture.

Truth be told, I would love to see Asian-Americans play Asian-Americans rather than Asian-Asian actors playing Asian-Americans.  But this movie was about the transition of Japan from the Shogunate government to a Constitutional Monarchy - so to have Japanese actors play Japanese-Japanese was no big deal to me.

As for the movie - I liked it a lot, despite the inaccurate and the unbelievable.

The main inaccuracy was that the final battle scene was that the Imperial Army fought with modern weapons and the rebels only used swords and arrows.  In reality, whether it was the Boshin War, or the skirmishes between the new government and old Shogunate diehards after the war, both sides fought with guns and cannons and other modern weapons.

Then there was the unbelievable.  Tom Cruise, during those few months of captivity, can handle a katana to duel Hiroyuki Sanada, who has trained all his life, to a draw.

Then there was Tom Cruise surviving the final battle - but that was a given - you need Cruise's character to tie up the loose ends.  But this was kind of worse because before going off to battle, the movie lies to the viewer - but it was the quality of the acting that made it so, too.  I knew Tom Cruise would survive the battle, but for a moment, before they went off, I thought he was going to die - the send off was really poignant.

All movies have unbelievable parts, so in that respect its no different - the sign of a good movie is that it can pull off those unbelievable, illogical moments - and this one did -  I liked the action - the ninja invasion was as well choreographed as any chambara movies made in the seventies.  Not only that, but the swords used by the ninja and samurai were accurate - ninjas used the staright blade with the square swordguard and the samurai used the curved blades with the round swordguard. The chemistry betwen the actors was good also.

I saw the film three times at the theatre, and three or four times on tv since. I really do enjoy the movie, but I wouldn't show it to a class on Japanese history as a truthful depiction of that period of transition.

Posted by Unknown at 9:09 PM No comments:

The Yagyu Clan in fiction

The Yagyu clan served as minor officials during the Tokugawa reign, most notably as the fencing instructors to the Tokugawa clan.

In fiction, they have become a first family of samurai - good and bad - of sorts.

Two of the best known Yagyu clan members in pop fiction are Jubei and Retsudo.

Yagyu Jubei, son of Yagyu Tajima no Kami Munenori, considered one of the greatest swordsman in Japanese history, in pop fiction, is a bigger than life folk hero - as I was explaining this to a person, the reply was, "Oh, like Davy Crockett, but Japanese."  The most iconic portrayal of Jubei, is of course, is by martial arts master, Sonny Chiba.  In fact, although in Kill Bill, Chiba plays a character by the name of Hattori Hanzo (another larger than life historical figure Chiba is associated with), it is music from Chiba's Yagyu television series that plays in the background in a couple of the scenes.

The other famous Yagyu in pop fiction is Retsudo, who is the villian in the story series, "Lone Wolf and Cub."  He has his sights set on the Yagyu clan being the controlling force of the Japanese government during the Tokugawa reign.  His son is beaten out of the job of official executioner by Ogami Itto - The Yagyu clan, led by Retsudo frames Ogami as a traitor - Ogami is stripped of his title, and lives his life as an assassin pushing along a baby cart carrying his three year old son, Digoro.  In the story, Retsudo is the youngest brother of Jubei.  To be honest, I don't know if he actually ever lived.

Posted by Unknown at 8:16 PM No comments:

Sword of the Undead

Promote Your Page Too 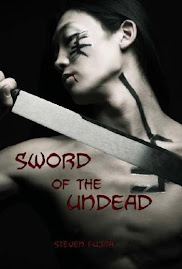